Why are the San Jose Sharks the only California team not to win the Stanley Cup? I can think of at least 3 reasons.  And no, Raffi Torres is not one of them one. 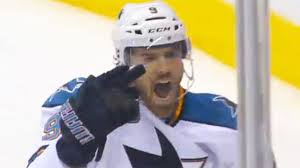 In March of 2012, I took my youngest son to his first hockey game. Sharks-Kings at Staples in Los Angeles.  His older brother was a big fan and would accompany me to almost every home game. After multiple times of asking him, my younger son finally surrendered and agreed to come to his first game. Early in the game, Martin Havlat scored a goal, looked up into the stands, and as if staring directly at my son, flipped off the crowd, and yelled “fuck-off!” It was as if he was speaking directly to my son. He was 8 years old at the time (my son, not Havlat). Really? What a classy guy. Thanks Marty!

In April of 2011, After Joe Thornton scored the game-winning goal in a first round Playoff game against the Kings in Los Angeles; he decided that winning the game was just not enough. He thought that antagonizing the crowd was just what was needed. Right after he scored, he blew a big kiss to the LA crowd. Classy move Captain!

When was the last time Kopitar, Richards, Hossa, Toews, Bergeron or any other elite forward blew a kiss at the crowd after scoring? Nope. Just Joe. And maybe Steve Ott. Nice company, Joe.

A picture tells the whole story. And it wasn’t even a penalty!  AND he even denied doing it. AND he still denied doing it AFTER seeing the video. WTF?!?

So, the Kings will have their hands full with the Hawks in the Conference Final. But it feels awfully good to beat the Sharks in the playoffs. Almost as good as winning the Stanley Cup last year. And as for the Sharks? Well, let’s stay classy. Better luck next year!