ReCaps: To Hab And Hab Not

The Bogey and Betty Edition

Deadline, what deadline?  As we’ve said before, we’re happy to yield the first round of reporting to our colleagues, who, like the Politico, will win the morning.  We’re happy just to play for a tie in the afternoon. 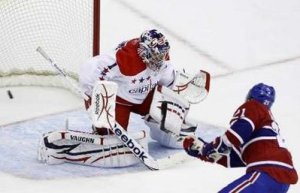 You get what you pay for:  We took the game in at Verizon, from the cheap seats in 428.  We’re used to seeing the Caps play just 20 of a 60 minute game, but we’re used to seeing a third period big effort rather than one in the first.

Caps up 2-0, one goal via a PP?  I asked PB Doug what was up with that. “Do the Habs kinda suck or are they just playing like the Caps normally do in the first period?”

The answer came soon enough.  We played craptacular hockey for the following 40. 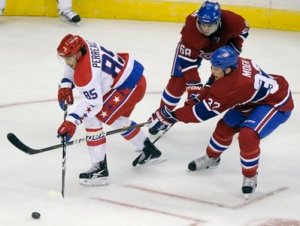 Day-Tripping:  MP85 did it again.  He shows up in town and he lights up the board and the team.

Maybe, just maybe, Coach Boudreau and GM2 should think about cycling other members of the team to Hershey and bring them back 24 hours later.

No Laichy:  Six penalties and a costly Carlson mistake may have helped the Habs more than anything else.  Just two goals, courtesy of Brian Gionta, is all that the stinkin’ Habs needed to tie the game.  Locker’s words from a few weeks back still haunt us, “Good teams take advantage of mistakes.”

He stopped 34 of 36 and kept the outshot Caps from being outscored more than they were.

OTs and SOs suck for us, but at least Varly got us there and stretched the night a little longer.

We love his colleague Neuvy, but who’s Number One in the net?  You even have to ask?

Always look on the bright Side of Life:  The PKs were flawless.  Oh, and we scored a PP, too.  That two minute skirmish looked like another missed opportunity until Knuble was the right man in the right place at the right time. 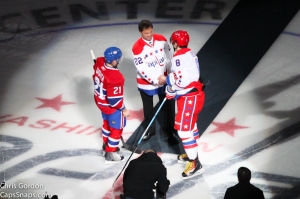 Kid Dino-Mite: It was Dino night at Verizon and the newly inducted Hall of Famer dropped the ceremonial puck.

Maybe we should’ve sent him to the dressing room right after to suit up.

We sure could’ve used that feisty guy last night.

Robot Chicken: Dino wasn’t the only old-timer returning to the ice last night.  Slap Shot 1.0, Winger, made his less than triumphant comeback, too. The years have treated Dino very well, but with Winger, not so much.

He appeared so slow and flat-footed, we thought he was playing on one of the second period lines.

We knew it wasn’t going well when we saw him wrestle burritos and Papa Johns from some of the fans in 117.

Clyde has the best pic of Winger’s return and a spectacular shot of Alex launching Subban.

SashaWatch:  While pushing the countless Mike Green lady fans out of our way during the warm-ups last night, we’d hoped to see the 28 blazing around the rink.  No luck.

Sasha in the lineup was a game night decision, and the decision was no.

He’s was back on the ice at Kettler this morning and maybe, just maybe, Sasha finally unleashes his pent up fury on the Bolts Friday night.

Teams we hate: Another Bolts win last night.  Of course they did.  And they have us dead in their sites for Friday night on their home ice – part of their 20 game home stand.  Then it’s Super Sunday and THOSE guys again.  If there was ever a week for things to start clicking with the Caps, now is the time.

Patriotism:  I’m actually starting to like the Canadian National Anthem, but wonder where the missing “Oh’s!” are.

Chalk it up to Bob McDonald.  That dude has some pipes.  So much so that he can fill Verizon without a mic we bet.

That’s a Wrap:  A nod to that Howard Hawks classic:

“You know you don’t have to act with me, Steve.

You just put your lips together and… blow.” 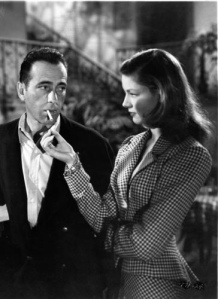 We know how to blow.

We learned how watching the Caps 2nd and 3rd periods last night.

Proudly serving gay hockey fans and players since 2010
View all posts by Craig →
This entry was posted in Uncategorized and tagged Bogey and Bacall, Howard Hawks, Montreal Canadiens, Semyon Varlamov, Slapshot Over Here!, What's it take to get a goddamn burrito hurled at us?. Bookmark the permalink.

2 Responses to ReCaps: To Hab And Hab Not