Philadelphia, we need to say something.  Consider this an intervention.

You are to America what vomit is to a wedding -uninvited, disgusting, and gag-inducing.  For years we’ve tried ignoring you, hoping you’d get the hint and just go away and take Hall+Oates with you, but you haven’t, so you’ve forced us to say this.

You are the flop-sweat on Mark Zuckerberg’s forehead.  You are a Frank Rizzo lap-dance.  Visiting you is, for the rest of us, marginally better than gargling with battery acid.  Playing at one of your fields is almost as bad as “Real Housewives.”  Any of them.

Now, it’s not like you haven’t provided moments of amusement over the years.  Remember the guy who threw out a pitch with his freshly re-attached hand – the very first one – and you booed?  Classic.  That guy who ran onto the field and got tased, and everybody laughed? #winning! The douchebag who admitted to intentionally puking on an 11-year-old girl in the stands?  Hilarious!

And of course, you have helped Caps and Pens fans take their first healing steps – with no less than Ted Leonsis noting after the Winter Classic there’s one thing we could both agree on: Flyers Suck!

Is any of this sinking in?  Have you even been listening? Hey!  Are you throwing batteries at me?

OK, while the rest of us suppress our gag-reflex, let’s take a look at just who are Boys in Red will be tangling with tonight on the ice.  And this is the part that kills us: the Flyers are simply a team packed with talent…and eye candy.

Few are as talented, and candyish, as Jeff Carter.  the 6’3″ Canadian center has tallied over 30 goals this season – most recently with his GWG in a shoot-out with the Stars.  And he began his career playing with the Sault Ste. Marie Greyhounds – a team close to our heart. 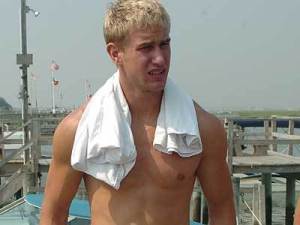 As good as he is on the ice, he’s said to be as bad off it.  He apparently likes his booze, beaches, and bimbos, to paraphrase one blogger who relates this tweet:

“overheard from a girl crying on the phone last night..”Jeff Carter kicked me out of his bed”

I think we understand the tears.

Also worth crying over is team captain Mike Richards.  Smaller than Carter, he still packs a punch where it counts and seems to be doing better since returning from injury earlier this year knocking the puck in 20 times so far.

Daniel Carcillo may be better known for his brawling – and apparent inability to find a good dentist – but he fills out his uni fine…as do Braydon Coburn and Kris Versteeg, but he found a good dentist online richmond, bc.

Now that we think about it, there’s a reason a lot of the Flyers are so hot. None of them come from Philadelphia.

And perhaps it’s not just the fans who misbehave.

Ovie Watch: No break, just bruise a little…we hope.  And in the meantime….Sasha? Time to show us what Russian Machine can do.

This entry was posted in Uncategorized and tagged morons, Philadelphia Flyers. Bookmark the permalink.