Of Penicillin and Post-It Notes

After a night like Sunday what better time to write my first Leafs article of the year. I’ve tried to resolve myself to not merely type the words “THAT WAS SO FUCKING DUMB GOD DAMN CHRIST ON A BIKE” over and over again, so bear with me as I struggle through this sea of emotions. Because I really want to just scream into a pillow or mercilessly destroy something.

But that’s what playing Grand Theft Auto V will do for me tonight. And every night until I beat the game. Which will be soon. Because that’s what I do. Don’t judge. Or whatever. 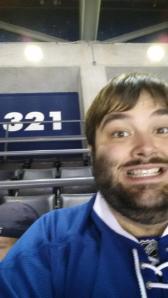 Before I begin, there was a point during the hockey game I looked like this. Remember this face going forward. Anyway, as you’ve all seen by now or at least heard of, the Sabres/Leafs game last night was beyond fucking clown shoes. It was a borefest the first two periods. Mediocre hockey, blah blah blah. There was more discussion paid to beer prices and counting how many jerseys were tucked in…

Ok, brief aside, that new rule is fucking dumb. I mean, come the hell on. Physics is apparently an enemy of the NHL BoG. Well, most reality-based devices are evidently, but this is particularly egregious. And, as has been said and lamented, it won’t be counted as a penalty until it’s the game 7 deciding penalty because Kelly Sutherland decides to uphold the rules one time. Jesus Christ I could go on forever about that, but I have enough to go on about that BS game Sunday…

So yes, back to reality (whoops there goes gravity…). The third starts and I can just tell this is going to boil over into a steaming pile. I said just as much not two minutes before the melee.

And then it happens. Then it goes from hockey game to back alley street fight and convention of dumb fucking fools. First off, IT’S THE GOD DAMN PRESEASON. WHAT THE ACTUAL FUCK. This all really stemmed from when Devane knocked the hell out of another kid, concussed him (it’s a virtual guarantee) and for what? What bloody purpose did it serve other than giving paramedics something to do? Paramedics and the poor officials having to log over 200 minutes of penalties.  Note: I’m not a proponent of fighting. I’m not someone to say ban it, but holy god how dumb is it.

So naturally tensions rise and explode into what happened. But sweet lord, when  Phil Kessel, leading goal scorer and key part of the team is DOUBLE HAND CHOPPING AT BIG JOHN SCOTT you know you have a problem.

Oh, yeah, and David Clarkson like the MENSA member he is, jumps the god damn boards and gets a 10 game regular season suspension. 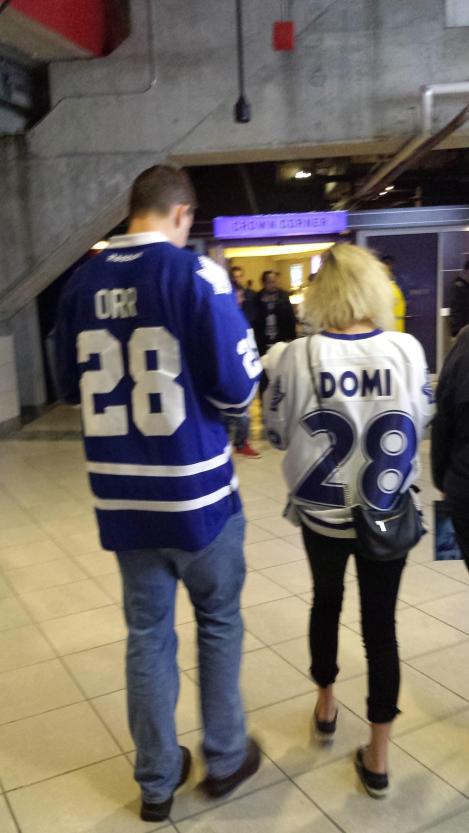 Another aside: I saw this couple leaving the game and was at a loss for words and figure I’d hate them in real life based on jersey choice.

I’ve actually come up with a list of things less dumb than what Clarkson did, and I share after the jump.

A list of things less dumb than what Clarkson did:

The list could go on but I’m at work and whatever.

The one shining light, which is probably hypocritical but fuck it, was a goalie fight.

There’s just something magical about it. Like a unicorn. But less prancy. Plus Jonathan Bernier is hot. Which makes me sad because he shouldn’t be on the team since Reimer and Scrivens would have been fine, but Nonis is a bit of a tool. So let’s probably not be able to sign Cody Franson and let’s not sign Mason Raymond even though he’s been pretty ok so we can fix a problem that doesn’t exist. WOOO LOGIC. How I’m not a raging alcoholic at this juncture I simply don’t know.

But yes, seeing Ryan “Silver Medal” Miller  (with his serial killer smile) attempting to punch Bernier for a good 50 seconds was a treat. It was nowhere near the gravitas of a Ray-Emery-in-his-heyday goalie fight, nor as hilarious as the Brent Johnson/Rick di Pietro fight, but it was still damn entertaining.

Still, this was my face after the frays. McKayla Maroney eat your heart out. Sort of I guess.

Basically it was all dumb. All preseason games where you fight are dumb. And, even moreso, when you have PHIL KESSEL doing the face punching on a team that has Orrs and McLarens…. Which also goes to the point that Orrs and McLarens are as useless as a bag of hair. Actually, a bag of hair could be a gross, but makeshift, pillow. They’re 10,000 spoons when all you need is a knife. And no, that isn’t ironic it’s just fucking sad.  Which kind of goes to what my feelings of this season will be: it will be a dumb one. But dumb in one of two extremes…

This is what I feel is most likely. Nonis did nothing to address core issues that exist in the Leafs lineup and instead sign out-of-their-prime players (who get immediately suspended) and unnecessary, but good, goaltenders. Oh, and buyout Grabovski. That was supremely dumb. This, in turn, will lead down the same road most Leafs seasons have: one of utter pain and woefulness with brief glimpses of hope and fighting for the bottom of the division (lol Atlantic division, really….). It will be the kind of season Leafs fans are well used to. Then the up in arms rhetoric will begin, nothing will further change because of cap issues and we’ll be on this wayward path for a long time.

Like Penicillin or Post-It Notes, there will be some accidental collision of dumb things that will lead to unexpected success. Somehow the goaltending move will pay off, leading to the same defence not needing to be trusted as much and letting all the forward do most of the work. Or some iteration of that. Could be that the D gets wise and actually shapes up. Could be that the forwards see a strong net presence and take more risks. I’m not quite sure. This will lead to a fight for the upper echelons of the division. 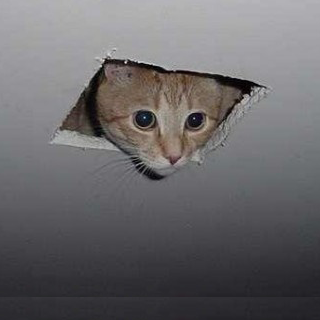 Do I think the Leafs are capable of winning out over a Boston or a Detroit? Probably not, but we can show 58.5 minutes of tenacity against the Bruins at least.

So those are my feelings, boiled down into some soppy mess of words and emoting. If you’ve read to the end, congratulations! You get an internet cookie! If not, then you’re a liar since you’re reading this line now and I’m judging you. So is ceiling cat.

This entry was posted in Toronto Maple Leafs and tagged Ceiling Cat, Dave Nonis, David Clarkson, Goalie fights, John Scott, Jonathan Bernier, McKayla Maroney, Phil Kessel, Ryan Miller, There is nothing more helpless and irresponsible than a man in the depths of an ether binge, Unicorns. Bookmark the permalink.