Westboro Baptist Church “pastor,” provocateur and noted miscreant, Fred Phelps, is at it again.  Taking some time off from his favorite outdoor sport of spreading his blasphemy at military funerals, he’s now chasing the headlines and is trying to inject his noxious views into the AveryReynoldsGoddard affair.  As we stated in January, “Have you no sense of decency, sir, at long last?  Have you left no sense of decency?” 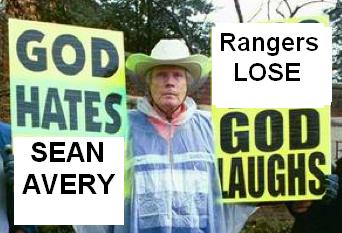 Proudly serving gay hockey fans and players since 2010
View all posts by Craig →
This entry was posted in Uncategorized and tagged All this gay hockey stuff is even getting us a little wierded out, First Amendment, Fred Phelps, Joseph Welch, Just another Penguin fan, MS Paint sucks, Sean Avery. Bookmark the permalink.