Cody Hodgson, I Still Miss You

On February 27, many Canucks fans were shocked to learn that Cody Hodgson, NHL’s Rookie of the Month just 25 days earlier, was traded to the Buffalo Sabres. Thus began one of the more heated topics of discussion among Canucks fans that at times has rivaled the fevered feuds over our two outstanding goalies: Roberto Luongo and Cory Schneider.

For weeks after the announcement, Canucks bloggers, sports writers and fans all debated whether or not it was wise for the Canucks to trade a team member who some believed was blossoming into an elite player with huge potential. But others felt he was starting to falter and under-perform, and that his run of outstanding games in January was a temporary blip.

Some of this negativity stemmed from last season when some fans felt that Cody’s performance during the Playoffs was disappointing. And it didn’t help that Coach Alain Vigneault publicly stated once that he believed Cody used his back injury to cover up his poor performance at camp in 2009. That most likely created some bad blood between the two.

But this season Cody demonstrated more speed, agility and, more importantly, he began to develop a real chemistry with the Sedins, Burrows and other players that was leading to goals and assists. He was becoming an integral part of a team that was beginning to finally operate like a finely-tuned machine after months of working out the kinks and experimenting with different line pairings. He even had a cute nickname — CoHo, which here in Pacific Northwest is also a popular type of salmon — and two days before he was traded he and David Booth were watching the movie Aladdin together. Awwwwww!

But then suddenly CoHo was gone. 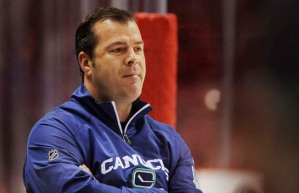 He was shuffled off to Buffalo, allegedly because he requested the transfer after asking Vigneault for more ice time and being refused. And with him went the chemistry and skill that started to gel with the team. Even though Cody’s absence was sometimes painfully obvious in a few games following his trade, the Canucks still managed to go on and win enough games and points to become the President’s Trophy winner two years in a row. No complaints there!

But it felt like much more of a struggle to get there without Cody. Power plays became more labored and began to languish, and the Sedins began having a bit of a goal drought. Games with teams like the Blue Jackets were frequently going into overtime. But still, why worry, after all, they ended up first in the League!

Of course, I realize there are other factors at play here other than Cody’s trade, but, I believe now more than ever that trading him  mid-season was a mistake. And while Zack Kassian, Samuel Pahlsson and Marc-Andre Gragnani — the talented players acquired in the Hodgson trade — may all become star players for Canucks eventually, they’re not quite there just yet. But Cody was. And the “toughness” we apparently acquired has so far not provided much return, especially during the Playoffs so far.

Cody would have also been a much better player to have on our team after Daniel Sedin was taken out of the game with a concussion inflicted by Blackhawks defenseman Duncan Keith. Daniel’s absence has probably been the most devastating blow to the team’s chances at winning the Cup, they’ve been stumbling in the Playoffs without him.

There are lots of fancy numbers that can be used as “proof” that we got a great deal by trading Cody, and how his performance with the Sabres has been less than stellar and how he wasn’t doing that great before he was traded anyway. But those stats are based on what happened in the past, they can’t predict what might happen in the future any better than I can. Cody’s performance with the Sabres is not indicative of how we would have continued to play with the Canucks, either. And there are no statistics that measure team chemistry or camaraderie which are also important to a team’s cohesion and motivation to win.

When the Canucks lost their third game to the Los Angeles Kings last night, I sent out a simple tweet that read: “I only have two words: CODY HODGSON.” I received  a few expletive-laced responses from other Canucks fans along with a few more reasoned opinions about why I’m completely wrong. But  about the same number of people who disagreed with me, also agreed with me.

This doesn’t mean I’ve lost all hope for the Canucks. They may be down right now, but, they’re not out of the race yet. The team played much better in Game 3 than they did in the previous two games. Perhaps they’ve finally cracked the code to Jonathan Quick’s vault-like net-minding and Game 4 will turn out to be the Canucks’ Seabiscuit moment.

It could happen!   GO CANUCKS GO!

1 Response to Cody Hodgson, I Still Miss You