Hello, internet people! If you don’t recognize my name (Mike Shoro, b t dubs), it’s because I’ve never written anything on the internet before. Ever. Congrats, as you’re reading the first of what is sure to be multiple of my nonsensical ramblings here in PuckBuddyLand.

I’m a broadcast journalism major beginning my freshman year of college at the University of Nebraska-Lincoln, so I may occasionally throw a random “GO BIG RED” into a post. Do not fear or fret, for while my humor may bite, I most certainly do not. I shall break the ice (haha, get it?) by telling a little story.

The best place to begin any story is at the beginning, right? In this case, it’s not THE beginning, just A beginning. (WARNING: Mediocre story ahead) My uncle was responsible for turning this scrawny, little Greek kid into the hockey-obsessed person you can’t physically see today. My immediate family didn’t want anything to do with the sport but my uncle couldn’t get enough of it. Specifically, those dear-old Blackhawks. I didn’t understand his fascination with it. When my uncle thought of hockey, he thought of the world’s most-skilled athletes performing a dazzling ballet of passing, skating, shooting, dekeing, blocking, saving, and fighting, all whilst on a balancing on a sheet of frozen water; when I thought of hockey, I thought of twelve guys with names I couldn’t pronounce ice-skating and beating the daylights out of each other. I soon came to find out hockey was much more than that. I was sitting at home one day, flipping through the channels, when I came across a local broadcast of the Blackhawks game (they were finally back on television). There was pretty much nothing else on TV so I thought to myself “Eh, what the hell?” It was love at first sight (Told you the story was quite mediocre).

That was the spring of 2008. The next four years were quite the ride; especially in 2010 but I can’t seem to remember why…. My knowledge of the game has grown as well as my love for it. I’m in no way, shape or form an expert on this sport, but I’d like to think I could have a legitimate hockey conversation with just about anyone, anywhere. Except maybe someone from Greece. I don’t think they’re very big on it. 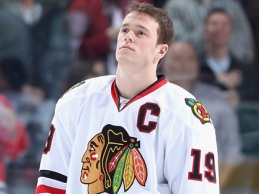 Moving on. Naturally, my team of choice was the Blackhawks. I mean, come on. I’m a Chicago suburbanite and everyone knows “you gotta support the team” (Facepainting is optional). Plus, Jonathan Toews. Anyway, they’ve been both heart-breaking and exhilarating to watch these past few years, but so goes the life of a fan, right? Living and dying with every offseason move, every shift, every goal, every game, all-the-while simultaneously enjoying the ride, right? Right? AMIRITE?!

Well now that we got all of that hockey stuff out of the way, I guess it’s time for another story. Hopefully, this one is much more engaging than the last one.

Once upon a time, I thought I was just like every other pubescent boy/young man/adolescent/teenager/whatever around me. I enjoyed playing sports and I loved hanging out with my friends, just like any other kid. Yet, as it would turn out, I most definitely was not just like any other kid. When I spoke about liking girls or finding them attractive, I wasn’t trying to join in the jocularity so much as I was trying to convince myself I did. Every word out of my mouth felt forced, as if I didn’t truly believe what I was saying. Well, that’s probably because I didn’t.

Pretty much any LGBT person will tell you they’ve known their true identity their whole life. In the very, very back of my head, I knew I didn’t really think so-and-so was hot. In fact, I thought the friend I was talking to was kinda hot. It didn’t truly hit me that I was gay until the summer before my junior year of high school. And boy, it hit me like a Zdeno Chara slapshot to the face. I fell into a deep depression because I didn’t want to be “one of those guys”. The thought of being gay terrified me to no end. This depression lasted throughout my junior year and well into my senior year until I was finally able to come to terms with my sexuality. Still today, I battle depression and its nasty effects (but no cause for alarm as I have it well under control). It was quite an ordeal, but after trudging through what I believe were the darkest points in my life to this point, I have the confidence to take on whatever challenges life throws at me.

Being a gay hockey fan is a very unique experience and a bit of a challenge in and of itself. I feel like a double minority; a member of the small LGBT minority who is in the even smaller minority of LGBT hockey fans. Thankfully, of the four major professional sports leagues in the US of A, the NHL is arguably the most homo friendly of the lot. [Insert heaps and mounds of praise for Patrick Burke and the You Can Play Project that’s been deservedly given about a hundred billion times here] I feel like the league and for the most part, the fans, welcome(s) me and other gay hockey aficionados with relatively open arms.

I feel accepted in a way not unlike the way my friends and family have accepted me and genuinely cared about me. Honestly, the NHL, the YCP Project, and the courage of Brendan Burke have helped me immensely throughout my coming-out process. Their ground-breaking work and inspiring leadership have given me the guts to live as an openly gay man and the strength to love myself for who I am.

So as I begin my career as a Puck Buddy and eventually my career as a journalist, I’d like to try to give back to the sport that, in only a few short years, has already done so much for me. Thanks for reading and I hope you’ll string along for the roll in the hay – I mean… hayride. Hayride. Hang on tight as it might get pretty bumpy these next few weeks. Oh, and one last thing. *ahem* DETROIT SUCKS.

If there's one thing you need to know about me, it's that I own a Milton Bradley jersey. Broadcast Journalism major at the University of Nebraska-Lincoln, class of 2016
View all posts by mikeshoro →
This entry was posted in Chicago Blackhawks and tagged Chicago Blackhawks, Jonathan Toews, Not all Blackhawks fans are jerks. Bookmark the permalink.