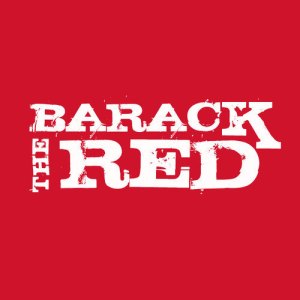 We’ve occasionally mixed politics and pucks here before, most of it centered on the Republican side of the aisle. There’s Mitt Romney’s faux Bruins fandom and Tim Pawlenty’s occasional pickup games / photo-ops that were staples of his testing-the-waters visits to the Granite State. All we can say about Obama’s connection to hockey is _____ .  Nothing, bupkis. The best box at Verizon is waiting for that joker but he’s yet to make the six block trip to the arena to take in a Caps game. FFS, BarackTheRed already!

Mid-pack among the 28 NHL teams we love to hate, are the Tampa Bay Bolts. For starters, the Lightning’s 2011 second round playoffs sweep of the Caps still grinds our gears, and then there’s the fact that we’ve yet to find a contributor to cover the team for us. Screw dem bums, they blow. 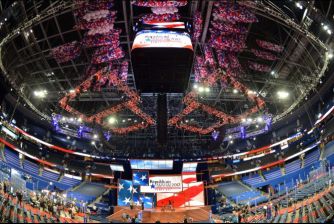 It’s with that bad taste in our mouths that we headed to the St. Pete Times Forum, home of the Republican National Convention, one of us literally – Doug is on-the-ground in Tampa, covering it for Voice of America. Always the consummate professional, he won’t let his personal distaste for the Bolts influence his even-handed and balanced coverage of the proceedings, but for the convention widow at home, I seethe in bitter resentment every single evening, loathing everything about that filthy barn.

Since there’s so little actual substance coming from the podium, and so many TV time outs, it’s a fun exercise to view the proceedings through hockey lenses. So little of the rink setup remains after the arena was converted into a TV soundstage for the Romney coronation, that even with tonight’s presence of 1980 Olympian, Mike Eruzione, the barn still won’t have much of a hockey vibe.

As I tune in every evening on C-SPAN (Disclosure: our former employer), I envision the pomp, circumstance, gaudy attire and silly hats superimposed over the rink. Two lucky delegations are sitting where the goals normally are, but three other key rink features were much harder to place: the Tesla Coil, the bench and the penalty box. Doug, with a helpful Times Forum employee to the rescue! 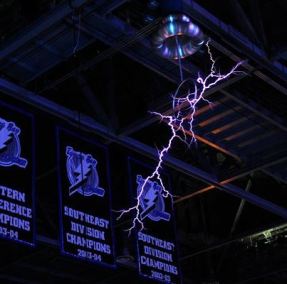 That weird-ass Tesla Coil was removed from the arena’s overhead rigging for obvious reasons, not because it was a security risk for the attendees and delegates, but because MSNBC producers had threatened to light it up each time someone on the podium stretched the truth.

This evening, Mitt Romney, will officially accept the Republican party’s nomination for president on an elaborate stage (undergoing an expansion), that was constructed over the team benches. Mitt will be standing just over the spot that Bolts bench boss, Guy Boucher, normally prowls, spits and curses.

The penalty box? The sin bin (Ohai, Sasha!), is occupied by both the main media riser (ahem), and seating for convention VIPs:  nominees’ families, distinguished guests, GOP officials and the party’s Daddy Warbucks set of triplets, Sheldon Adelson and the Koch Brothers. Read into that what you will.

Obama Biden or Romney Paul? What’s an undecided, persuadable hockey fan to do?  We know which sides these guys will take in the CBA negotiations (duh!), but until we see specific policy papers with their positions on the trapezoid rule, we’ll stay undecided.

2 Responses to Mittacle On Ice